Additional Connections to Japan and Taiwan

It also connects to GÉANT at 2.5Gbps from Madrid to Mumbai and at 10Gbps via the ORIENTplus Beijing-London link.

Starting with a single circuit between France and Korea in 2001, the TEIN regional network has been managed since 2006 by DANTE. In September 2012, responsibility for the new phase, TEIN4, has been transferred to the TEIN* Cooperation Center (TEIN*CC), which has been established by the Korean government to continue to develop the network up to 2016 with DANTE support. TEIN continues to receive funding support from the European Commission which is contributing 8M € for TEIN4. 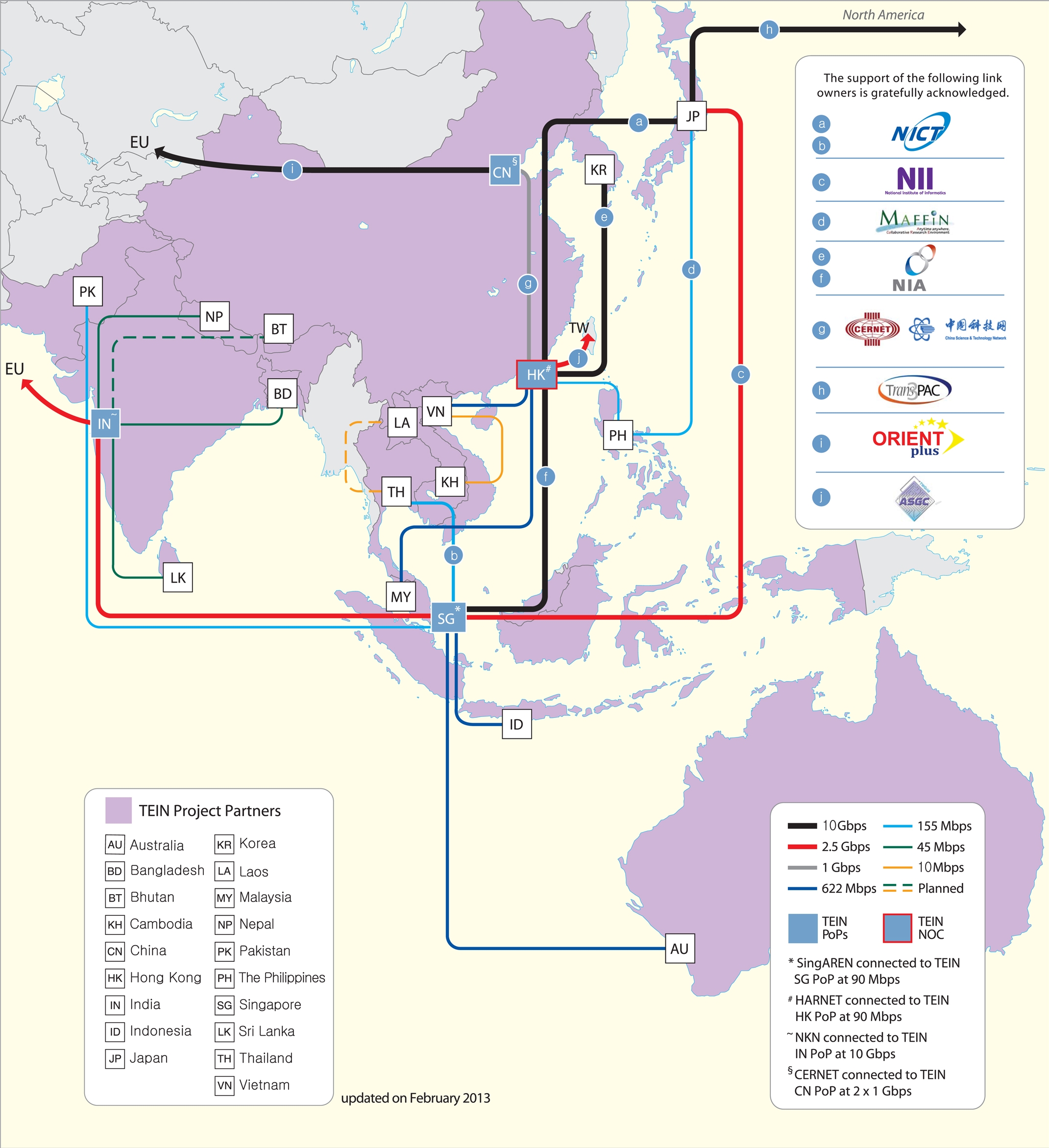 The following NRENs are currently connected to TEIN3:

ORIENTplus is the successor of ORIENT, a joint project of the European Commission, the European R&E networking community, CERNET (China Education and Research Network) and CSTNET (China Science and Technology Network), and operates alongside the complementary TEIN initiative. Upgraded from 2.5 Gbps in January 2013, the ORIENTplus link between London and Beijing provides a direct capacity of 10 Gbps between Europe and CERNET and CSTNET in China. It continues to be the highest capacity direct R&E link between Europe and China. The upgrade will allow point-to-point services for users in addition to the existing IP service.

ORIENTplus also provides an additional peering point for GÉANT with the TEIN network. The significant synergies between ORIENTplus and TEIN maximise bandwidth and reliability benefits to the user communities in Europe, China and the Asia-Pacific region.
The main applications running over the ORIENTplus link include genome projects, IN2P3-iHEP (LHC collaborations), EXPReS (radio Astronomy) and the Sino-Italian ARGO – YBJ project (astrophysics).


Additional Connections to Japan and Taiwan

In addition to its connection to the TEIN3 network for the Asia-Pacific region, the Japanese network, SINET3, also peers with GÉANT in the United States via the IRNC-funded 10-Gbps IP link between Amsterdam and New York.

The Taiwanese network, TWAREN, also connects to New York where it peers with GÉANT, enabling Taiwanese academics and scientists to collaborate with their partners in Europe.

The Academia Sinica Grid Computing (ASGC) Network of Taiwan also peers with GÉANT via a 10-Gbps link to the GÉANT Point-of-Presence in Amsterdam.