UbuntuNet, the regional high-speed Internet network for research and education has just been commissioned in Eastern and Southern Africa

UbuntuNet Alliance, the research and education network for Eastern and Southern Africa; and DANTE, the operator of GÉANT, the pan-European research and education network, today announce the commissioning of the UbuntuNet network, the regional high-speed Internet network connecting researchers, educators and students in Eastern and Southern Africa to their peers in the region and to Europe. 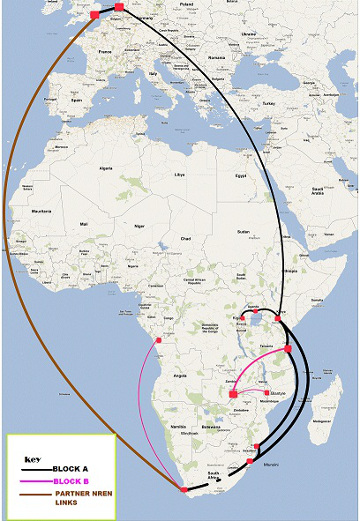 The rollout of the UbuntuNet network has been implemented in two phases based on country readiness to connect to the regional network. Block A, which was completed in February 2014, procured equipment to establish Points of Presence (PoPs) in Mtunzini, Maputo, Dar es salaam, Nairobi, Kampala and Kigali, and to upgrade the Ubuntunet Alliance PoP in London.  High capacity cross border links interconnecting these PoPs to create a regional research network were also procured under this phase, as well as a transcontinental link between Nairobi and the Ubuntunet Alliance’s PoP in Amsterdam.  The first phase serves a total of six NRENs namely TENET (south Africa), MoRENet (Mozambique), TERNET (Tanzania), KENET (Kenya), RENU (Uganda) and RwEdNet (Rwanda), and forms the backbone on which the network to serve the entire Alliance region will be created.